First of all, I should write a small introduction to the start of my weekly post about my internship at Marije Vogelzang’s studio. Last year she wrote on several social media platforms that she was looking for two interns. I had read a lot about her during my Master Thesis and had met her during the Dutch Design week where I had a good conversation with this warm, positive person so when I discovered this possibility to learn from her and work with her together I immediately wrote an e-mail and attached my portfolio. After that, it took quite some time and to be honest I kind of forgot that I applied for the internship. Until I discovered an e-mail of her secretary saying that I was selected. 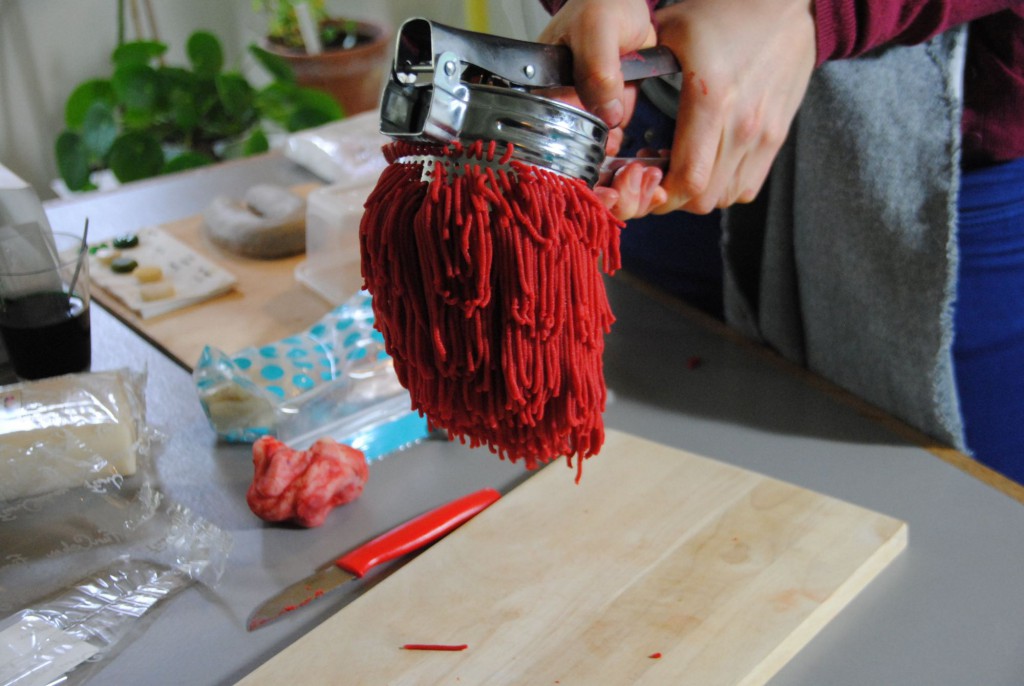 Enough introduction: I will start with telling you about the first week at the beautiful, though still a bit cold, studio in Dordrecht. As a starting exercise, Marije gave Sue and me a big chunk of marzipan, some food colour paint and her old modells and asked us to remake her faked meat models. This was actually a nice task to begin the internship with because it made us familiar with her studio, we could work almost only with our hands and we could probe our team work. Two pairs of unwashable dirty hands, 4 kilos of marzipan and many (failed) experiments we finished most of them and they will actually be shown today during a video made in the Markthal in Rotterdam.

Yesterday we then went to an event about BioArt in Eindhoven which was basically art with scientifical and/or biological themes. What mostly fascinated me was the talk from Emma Dorothy Conley about a microbiome based art piece which offers DNA obscuration solutions to protect your privacy. Since your microbiome gives much information about your lifestyle, the places you have been and the amount of friends you have it can also in future companies be used against us while destroying our privacy rights. Therefore she invented a microbiome database where you give your skin bacteria and for that you receive a gel or balm to put on your skin which will add extra DNA, so that your baceterias DNA will get mixed with the new DNA and because of this diffusion your personal bacteria genome cannot be distinguished any longer.

Next week we will make new packaging for the faked meats, redesign the poster and start with the plant bones. The plant bones are also an exciting project of Marije but more about that later…

One thought on “Internship at Marije Vogelzang”